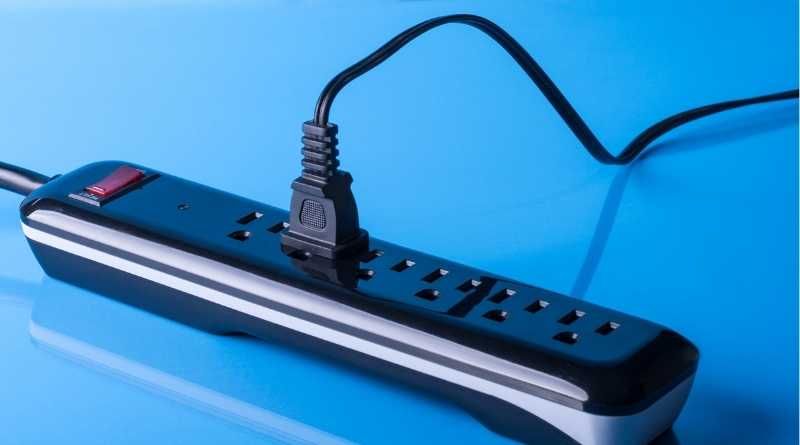 Surge protectors are an important part of any home office setup. They protect supplies and computer equipment from power surges and spikes; if you have your own office, then you probably have a surge protector already installed, but what about your laptop?

Should you use a surge protector on your laptop?

Using surge protectors is highly recommended for your laptop. A power surge could easily damage your laptop because it’s filled with voltage-sensitive parts. Laptops aren’t designed to withstand violent power surges. Although they may survive for a while, a surge protector will extend their lifespan.

Although, laptops have built-in surge protection, it is much smaller than the one found in desktop computers, as laptops generally consume less power than desktops.

Power lines provide consistent supply and variations are unlikely to cause any damage to your electronics. However, a lightning strike or maybe a large amperage short can create a powerful surge that will exceed the limitations of an unprotected line, and this can damage or even fry your laptop.

Not having a working laptop after a power surge is a nightmare. Surge protectors aren’t that expensive and can save you from replacing your costly electronics.

How Many Joules Do I Need To Protect My Laptop?

Even though power surges, brownouts, and lightning are rare, they can happen—and when they do, your laptop or computer will be damaged if it isn’t properly protected. Surge protectors can help you avoid this, but you should always pay attention to the joule rating of the surge protector. This is the most important factor on surge protectors.

So, how many joules your surge protector actually needs to have to avoid getting your laptop fried during a power surge?

What To Look For On Surge Protectors For Your Laptop

Laptops are fairly expensive these days; most people will not simply lay out hundreds if not thousands of dollars without considering what they are buying. The same mindset should be applied to a laptop’s accessories, especially surge protectors.

Many people today have a laptop as their main computer so one would only want to have the best protection for such an investment. Below you will find tips on what to look for when purchasing a laptop surge protector.

Underwriters Laboratories (UL) is an independent, not-for-profit organization that specializes in safety. They rigorously test products and then assign them a seal of certification if they deem the product to be safe. Anything with the UL seal has been tested by a trusted, independent party and meets a certain standard of quality. You should look for the UL seal when buying a surge protector.

Usually, a surge protector will have a seal from Underwriters Laboratories. You want to look for the mark that says it has been evaluated against ANSI/UL 1449.

If you’re looking to protect your computer system or any other sensitive electronics, then you want to make sure the surge protector you’re looking at has the mark that states it has been evaluated against UL 1449. This is a more demanding standard of testing, and your electronics will be safer as a result.

Having this mark does not mean the product is infallible, but it does mean that it has undergone rigorous testing that can give you some peace of mind.

Some surge protectors may look the same, but they fail to meet this higher standard of testing. Although it is unlikely, it is possible for these sub-par surge protectors to actually do more harm than good if they themselves are damaged during a power surge.

A surge protector’s absorption rating is one of the most important stats when it comes to determining what you should buy.

So what is the absorption rating?

The clamping voltage is the voltage that causes the surge protector to wake up and begin absorbing electricity. Pick an clamping voltage somewhere around 400V or less, the lower, the better.

If you’re shopping for a surge protector, check the warranty. Manufacturers usually only offer warranties for a short time, so it’s better to pick one with a long warranty.

You have recourse if the surge protector fails to protect your electronic devices, so long as the warranty is still valid.

For instance, some surge protectors have a warranty for damage caused by a power spike. If your surge protector fails, check to see what’s covered and what’s not, and how you can get it repaired.

What Can Happen To Your Laptop During A Power Surge?

With the amount of storms and high winds in the United States, it’s almost a guarantee that you’ll have a power surge at some point in your life.

The good news is that most of the time, the damage is minimal, and you can reasonably expect to pick up your laptop and power it back up without much of an issue.  The bad news is that sometimes, power surges can do more damage than you’d imagine.

So what could happen if your laptop isn’t protected by a surge protector?

If you’re using your laptop as a desktop replacement, you probably leave it plugged in all the time, which is fine, but you have to be careful. Over time, power surges can lead to permanent damage to your laptop’s battery, charger, or both.

When it comes to your laptop, you don’t want to lose power, especially when you’re in the middle of getting work done. When exposed to a power surge, your laptop PC may not function properly. It could suffer damage to its battery or its charger. Both the charger and the battery can fail during a power surge. The battery may no longer take a charge, may require substantially more time to charge fully, or may exhaust its battery charge more quickly.

If a power surge is bad enough, it could cause damage to the motherboard of your laptop — and make it impossible for the computer to turn on at all. Overheating is another cause of laptop motherboard failure that makes it impossible to boot up. In either case, you have no choice but to replace your current motherboard. This type of problem usually happens as a result of a power surge or overheating and causes computers to turn off without warning.

Not only can power surges and spikes damage your computer’s motherboard, but they can also harm the hard drive. Unfortunately, this means permanent data loss in some cases. However, there may be a more immediate issue that occurs. If your hard drive is damaged, it can cause your computer to work poorly or not at all.

Slowdowns could significantly impact the speed of a computer system, causing it to take longer to power up or applications to open. Files may not open at all. Convenience issues arise, or a major upheaval could happen, depending on the circumstances.

The most important thing in your home office is a surge protector, because, if you have this device, you will not need to worry if the power is suddenly cut off suddenly and there are devices that are directly plugged into the sockets.

The UL standard is the most important factor to be considered, because there are many different types of surge protectors. Many of them are just plain junk. Therefore, after finding one that meets the UL standards, you will know that it is good. surge protector that isn’t up to standard is not only a waste of money, but it can actually be dangerous.